Endocrine disruption: Estimation of the binding affinity of small molecules towards the Estrogen receptor

The presence of hormonally active compounds — endocrine disruptors — in the biosphere has become a worldwide environmental concern. It has been concluded that such compounds elicit a variety of adverse effects in both humans and wildlife including promotion of hormone dependent cancers, reproductive tract disorders, and a reduction in reproductive fitness. A number of receptor-mediated hormonal responses to toxicity are known, including xenobiotic effects on the thyroid hormone receptor, the epidermal growth factor receptor, the Aryl hydrocarbon receptor as well as effects mediated by the androgen and the estrogen receptor (ER), respectively. A variety of compounds in the environment have been shown to display agonistic or antagonistic activity towards the ER, including both natural products and synthetic compounds. It would, therefore, be of great interest of having a computational tool at hands, allowing for fast and reliable estimation of the binding affinity of a given compound — real or hypothetical — to the ER. 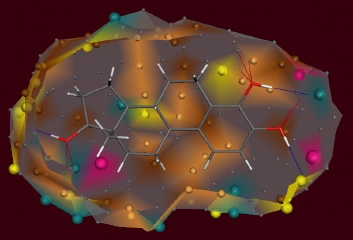 
Based on the three-dimensional structure of the estrogen receptor with bound diethylstilbestrol (PDB code = 3ERD), we have docked 106 compounds comprising six molecular classes (including steroids, biphephyls and stilbestrols) and covering a range of seven orders of magnitude in IC50 (0.2 nM-2.8 mM). Each complex was fully optimized using the Yeti software. Subsequently, we used a Monte-Carlo search protocol to sample all feasible binding modes. Most compounds are asymmetric in nature and an only modest induced fit (rearrangement of some side chains) tolerates several different orientations of the ligands. Up to four binding modes per molecule were accepted (if the internal ernergy of the ligand was within 4.0 kcal/mol from the global energy minimum) and composed into a 4D data set (344 orientations/conformations for the 106 compounds). These data were used as input for multi-dimensional QSAR (software Quasar) where the genetic algorithm is able to identify the bioactive orientation for each ligand molecule. The data set was split into 88 training and 18 test ligands. Quasar allows for the simulation of induced fit and can evaluate multiple scenarios in parallel (5D-QSAR). As the binding site of the ER is solvent-accessible, the solvation model (e.g. solvent stripping) might differ between the various molecules. In 6D-QSAR, this can be scaled independently. The simulation reached a cross-validated r² of 0.903 and yielded a predictive r² of 0.885. The maximal deviation from the experiment corresponds to a factor 9.6 in IC50 for the ligands of the training set and to a factor 5.9 for the ligands of the test set. With such a model, we are now in a position to scan any hypothetical or real compound for potential activity towards the ER. 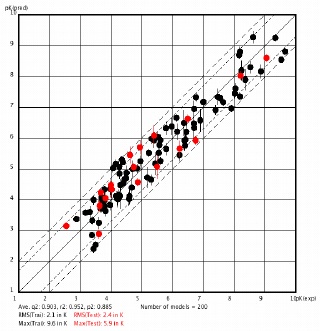 More recently, we succeded in validating a model for the estrogen β receptor subtype based on a series of 96 receptor agonists. Using automated, flexible docking (software Yeti) combined with 6D-QSAR (software Quasar), a model for the ERβ was generated based on 72 training and 24 test compounds. The simulation reached a cross-validated r² of 0.795 and yielded a predictive r² of 0.679. 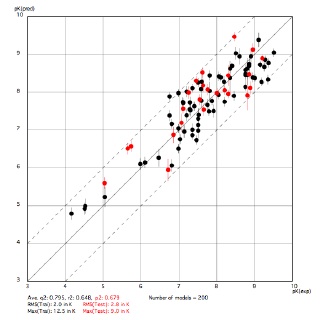