Cardiotoxicity: Estimation of the binding affinity of small molecules towards hERG.

hERG (the human Ether-à-go-go Related Gene) is a gene that encodes the pore-forming subunit of a voltage-depedent potassium (K+) channel, a ion channel highly expressed in the heart and in the brain. In the heart, the hERG channel is responsible for the repolarisation of ventricular myocytes after an action potential. In particular, it regulates the correct timing of the repolarizing current allowing the coordination of heart's beating. The importance of this protein was highlighted by the discovery that inherited mutations in hERG were responsible for long QT syndrome, a cardiac disorder that predisposes affected individuals to arrhythmia, and can lead to death. By the mid-1990s it became evident that also a number of drugs could lead to ventricular arrhytmia, by blocking the hERG channel, and some of them were withdrawn from the market. For this very reason, hERG is nowadays recognized as the primary antitarget in the screening of drug candidates. Quantifying hERG–ligand in silico can potentially reduce the risk of cardiotoxicity. 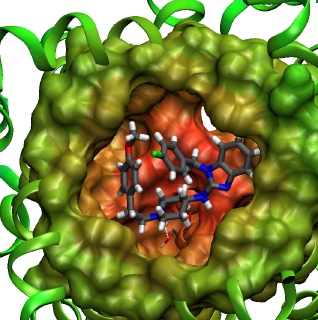 LiverX receptor with bound ochratoxin A.

Based on hERG homology model, we have docked 50 different compounds and sampled all possible binding modes by means of a Monte-Carlo/Metropolis search protocol as implemented in the Yeti software. Those orientations were then composed into a 4D data set and quantified using the 6D-QSAR software 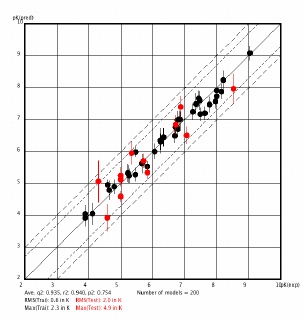