Endocrine disruption: Estimation of the binding affinity of small molecules towards the Liver-X receptor.

Diseases of the heart and circulatory system (cardioÂvascular diseases or CVDs) are the direct cause of more than four million deaths per year in Europe, corresponding to 43% of all deaths of all ages in men and 55% in women. Elevated plasma cholesterol levels are a major risk factor in CVDs, being correlated with coronary heart diseases and stroke, and promote atherosclerosis. Liver X Receptors (LXRs) — members of a superfamily of nuclear hormone receptors and represented by two subtypes, LXRα and LXRβ — have been shown to be involved in cholesterol homeoÂstasis. LXRs are ligand-dependent transcription factors that form permissive heterodimers with the retinoid X receptor (RXR) to regulate the expression, directly or indirectly, of a number of genes involved in cholesterol and fatty acid metabolism. 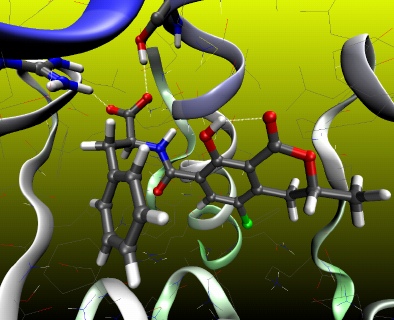 LiverX receptor with bound ochratoxin A.

Based on the (molecular-dynamics relaxed) 2.4 Å resolution structure of CP450 2C9 (PDB code = 1PQ6), we have docked 52 different compounds and sampled all possible binding modes by means of a Monte-Carlo/Metropolis search protocol as implemented in the Yeti software. Those orientations were then composed into a 4D data set and quantified using the 6D-QSAR software 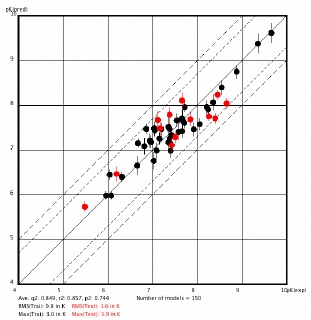