Endocrine disruption: Estimation of the binding affinity of small molecules towards PPARγ.

In modern societies, chronic diseases such as diabetes, obesity, atherosclerosis and cancer are the most frequent cause of deaths. There is evidence that a group of closely related nuclear lipid-activated receptors (referred to as peroxisome proliferator-activated receptors, PPARs) are involved in these diseases. PPARs belong to the sterois/thyroid/retinoid receptor superfamily and control a variety of genes involved in different pathways of lipid metabolism, including fatty-acid transport, cell uptake, intracellular binding and activations as well as catabolism (β and ω oxidation), storage and stimulation of glucose uptake. In addition of being susceptible to fatty-acid activation, they respond to fibrate-hypolipidemic drugs as well as to insulin sensitizers. PPARγ is mainly expressed in adipose tissue and, to a lesser extent, in the colon, the immune system and the retina. PPARs were first cloned as nuclear receptors that mediate the effect of synthetic compounds referred to as peroxisome proliferators on gene transcription. At the molecular level, PPARs act in a similar manner as other nuclear hormone receptors. Like other members of the nuclear receptor family, PPARs are ligand-activated transcription factors. 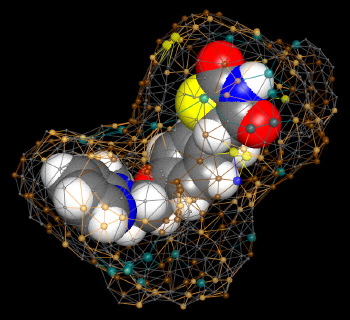 Our QSAR study was based on a total of 95 compounds. 75 molecules thereof were assigned to the training set and the remaining 20 used as test compounds. The model for PPARγ converged at a cross-validated r² of 0.832 and yielded a predictive r² of 0.723 for the test compounds. 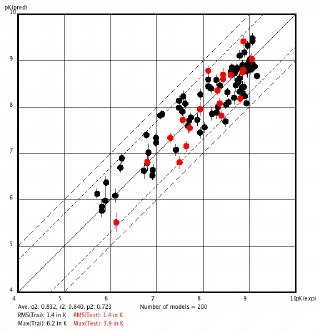