Endocrine disruption: Estimation of the binding affinity of small molecules towards the Progesterone receptor.

Estrogen and progesterone are two female reproductive hormones that have effects on multiple organs beyond reproductive system. Their actions are mediated through receptor-based gene stimulation. The progesterone receptor (PR) is a member of the nuclear receptor (NR) superfamily that includes the androgen (AR), estrogen (ERαβ), glucocorticoid (GR), and mineralocorticoid (MR) receptors. Two different isoforms, PRα and PRβ were identified in various organs targeted by progesterone. It has been observed that PRβ acts mainly as progesterone-responsive gene activator, whereas PRα functions as a modulator of the PRβ activity and repressor for other NRs, suggesting that PRα is an important modulator for steroid hormone receptor actions. Primary targets of PR agonist and antagonist combined with estrogen are hormonal birth control, hormone replacement therapy, endometriosis, dysfunctional uterine bleeding, dysmenorrhoea, endometrial cancer, uterine leiomyomas, breast cancer and meningiomas. Focus on development of more selective and efficacious PR modulators, including both agonists and antagonists, have increased to a great extent considering the unwanted effects due to affinities towards other NRs (AR, GR, ERαβ, MR) and the GABA (γ-amino butyric acid) receptor. 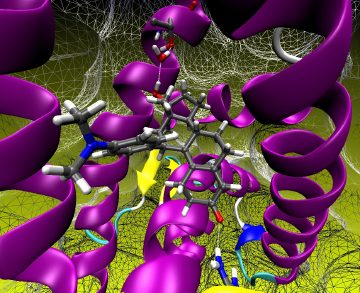 Binding of Mifepristone to the progesterone receptor as identified through automated, flexible docking.

Our QSAR study was based on a total of 88 compounds. 80 molecules thereof were assigned to the training set and the remaining eight used as test compounds. The model for the progesterone receptor converged at a cross-validated r² of 0.766 and yielded a predictive r² of 0.652 for the test compounds. 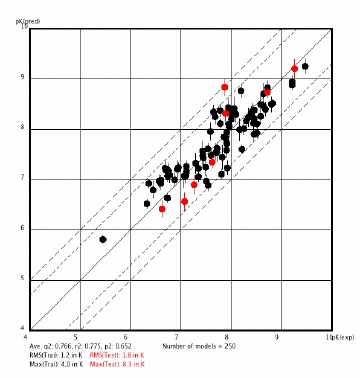