Animal testing is still compulsory worldwide, for the approval of drugs and chemicals produced in large quantities. Computer-assisted (in silico) technologies are considered to be efficient alternatives to in vivo experiments, and are therefore endorsed by many regulatory agencies, e.g. for use in the European REACH initiative. Advantages of in silicomethods include: the possible study of hypothetical compounds; their low cost; and the fact that such virtual experiments are typically based on human data, thus making the question of interspecies transferability obsolete. Since the mid-1990s, computer-based technologies have become an indispensable tool in drug discovery — used primarily to identify small molecules displaying a stereospecific and selective binding to a regulatory macromolecule. Since toxic effects are still responsible for some 20% of the late-stage failures, there is a continuing need for in silico concepts which can be used to estimate a compound's ADMET (adsorption, distribution, metabolism, elimination, toxicity) properties — in particular, toxicity. The aim of this paper is to provide an insight into computational technologies that allow for the prediction of toxic effects triggered by pharmaceuticals. As most adverse and toxic effects are mediated by unwanted interactions with macromolecules involved in biological regulatory systems, we have focused on methodologies that are based on three-dimensional models of small molecules binding to such entities, and discuss the results at the molecular level. 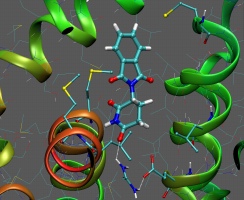