Inhibition of Cytochrome P450 3A4 (CYP3A4) by small molecules represent a major mechanism associated with undesired drug-drug interactions, responsible for a substantial number of late-stage failures in the pharmaceutical drug-development process. For a quantitative prediction of associated pharmacokinetic parameters, we developed a computational model allowing to predict the inhibitory potential of 48 structurally quite diverse molecules. Based on the experimental structure of CYP3A4, we first sampled possible binding modes using automated docking (software Yeti) including protein flexibility. The results are consistent with both X-ray and metabolism data. Next, an ensemble of energetically favorable orientations was composed into a 4D dataset, to be used as input to a multidimensional QSAR technique (software Raptor). A dual-shell binding-site model allowing for an explicit induced fit was then generated using hydrophobicity scoring and hydrogen-bond propensity. The resulting model (q² = 0.825; p² = 0.659) predicted the binding affinity of all compounds within an rms of 2.7 (training set) and 3.8 (test set) of their experimental value. 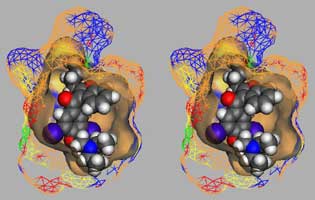 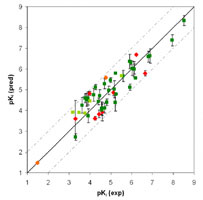 Left: Stereorepresentation of Amiodarone bound to the CYP3A4 binding-site surrogate as generated by Raptor 2.0.