Novel ligands for the chemokine receptor-3 (CCR3): A receptor-modeling study based on 5D-QSAR


In this journal, we recently reported the development of a receptor modeling concept based on 5D–QSAR (quantitative structure-activity relationships). Therein, the fourth dimension refers to the representation of the ligand molecules as an ensemble of conformations, orientations and protonation states. The fifth dimension is associated with the simulation of the receptor-to-ligand adaptation and allows for a simultaneous evaluation of different induced-fit scenarios. Using two complex systems — the Aryl hydrocarbon and the Neurokinin-1 receptor, respectively — we could demonstrate that multidimensional QSAR not only reduces the human bias with the identification of the bioactive conformer and the selection of an induced-fit protocol but also yields more accurate results, particularly for high-affinity compounds.

In this account we report its utilisation towards the design of new compounds able to inhibit the chemokine receptor–3 (CCR3) in the low nanomolar range. For the model building process, we made use of four different classes of antagonists – ureidoalkyl-piperidines (series-1: 50 compounds), ureidoalkyl-piperazines, aminoalkyl-piperazines and amidoalkyl-piperazines (series-2: 91 compounds). Using the Quasar software, we built two families of receptor models which yielded a cross-validated r² value of 0.950 and 0.861, respectively. The model families were then tested using compounds different from those in the training set, yielding a predictive r² of 0.879 and 0.798, respectively. A series of five scramble tests each demonstrated the sensitivity of the surrogates towards the biological data. To identify structural changes allowing for a further improvement of the binding affinity, the individual functional groups of all compounds were analyzed for their contribution towards the free energy of ligand binding, ΔG. 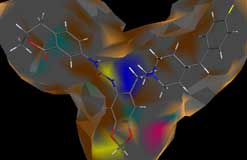